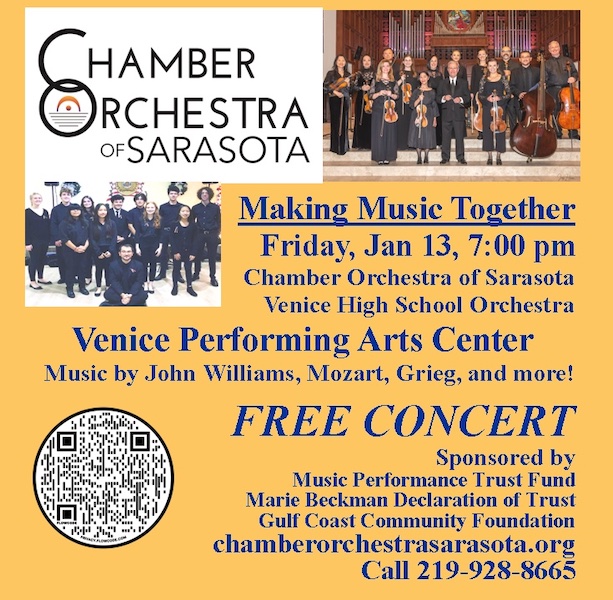 The Chamber Orchestra of Sarasota (Robert Vodnoy, music director) will join forces with the Venice High School Orchestra (Christopher Riley, conductor) to present a free concert on January 13, 2023 at 7:00 pm. The Chamber Orchestra will perform excerpts from Wolfgang Amadeus Mozart’s Divertimento in G Major, K 138 and Edvard Grieg’s Holberg Suite. The Venice High School Orchestra will join the Chamber Orchestra for performances of three works: William Grant Still’s Danzas de Panama, John Williams’ Theme from Schindler’s List, and Yaniv Segal’s Fanfare. Segal was the assistant conductor of the Naples Philharmonic. Still’s Danzas de Panama is a spirited work for strings based on Panamanian and Afro-Caribbean tunes and work-songs. Williams’ Theme from Schindler’s List will be performed in an arranged for two solo violins and strings featuring the concertmasters of both orchestras. Christopher Riley is the principal bass of the Chamber Orchestra.

This will be the second educational outreach concert presented by the Chamber Orchestra. Last season, the orchestra played a similar concert with the Manatee School of the Arts Orchestra in Bradenton. The concert will be sponsored by the Music Performance Trust Fund with additional sponsorship by the Marie Beckman Declaration of Trust. For more information about the chamber orchestra, this program and its entire season, visit their website at www.chamberorchestrasarasota.org or call Robert Vodnoy at 219-928-8671 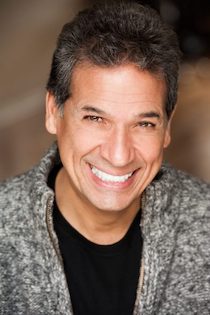